In the simplest technical sense, cloud computing refers to the use of a network to provide on demand access to data and data processing applications. But this definition differs little if at all from the concept of the World Wide Web as it has existed for almost two decades. Indeed, the websites, email, and online database interfaces that we use every day all qualify as cloud computing in this sense.

Much like ‘blogging’ or ‘Web 2.0’, ‘cloud computing’ is a buzzword that is more indicative of an evolving approach to how the Internet is used rather than a technology unto itself. What defines the cloud computing trend is the migration of data storage and application services that have traditionally resided on end-user hardware to the Internet. From an end-user perspective, this represents an evolution of the Internet from a ‘dumb network’ simply linking user to user, to a highly configurable and ubiquitous source of data and services.

With this in mind, the National Institute of Standards and Technology provides this definition:

“Cloud computing is a model for enabling convenient, on-demand network access to a shared pool of configurable computing resources (e.g., networks, servers, storage, applications, and services) that can be rapidly provisioned and released with minimal management effort or service provider interaction.”

This trend will have powerful ramifications for many industries, including hardware manufacturers, software developers, data security and privacy providers, IT consultants, online communications professionals, and others.

What do people mean when they refer to the cloud?

The concept of the “cloud” originated in the telephone industry and was used to distinguish the line between the responsibility of telecommunication provider and that of the customer.

With respect to computing, “the cloud” really has no different specific technical definition but ostensibly, it may be used to describe the entirety of data, applications and other resources available throughout a particular network. It is also increasingly being used as a marketing term when referring to advanced services.

The “Intercloud” extends the concept of cloud computing globally. This refers to a “cloud of clouds” sharing data, applications and resources, similar to the Internet as a “network of networks.”

How does this differ from the traditional concept of the Internet? 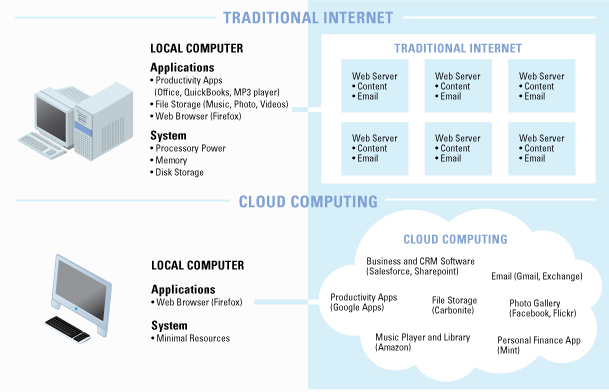 How does cloud computing work?

Cloud computing structure has two major components, the front-end and the back-end, which correspond with the end user and network-based service providers.

Devices and the Cloud 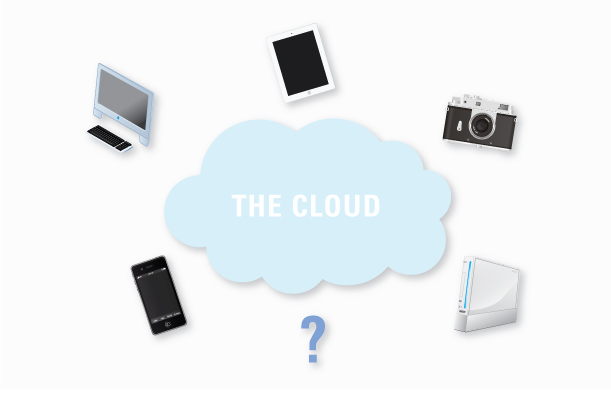 Applications provided in a cloud-based environment are also know as Software as a Service (SaaS). Some examples are:

The move towards cloud computing has at least in part been driven the pursuit of more efficient hardware implementations by larger operators such as Amazon, Microsoft and AT&T, as well as by product innovation by end-user providers such as Google. Combined, some of the perceived benefits of cloud computing include:

But cloud computing is not without its potential drawbacks, which may include:

In addition, the evolution of cloud computing raises some as yet unanswered questions: